A Wizard is a type of General that may attempt to harness the Winds of Magic and cast a spell. Wizards have a ‘Level’ which can be either 1, 2 or 3. This indicates the number of spells they can attempt to cast in any one turn. To do this the Wizard activates as if he were a unit. Casting a spell is a Difficult activation. As a General he can re-draw the activation attempt.
If successful the Wizard selects a spell from their army list and attempts to cast it. 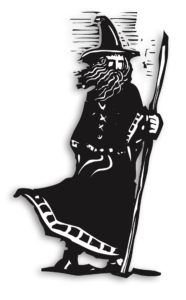 The target for success is indicated by the spell itself. If the card is equal to, or greater than, the casting cost it has been cast successfully. The effects of the spell are enacted immediately. Some spells have an immediate impact and some have an effect that may last a longer time. In this case as suitable marker must be used to indicate the spell’s effect.
Unless specified by the army list, a Wizard may only attempt to cast each spell once per turn. Multiple Wizards can cast the same spell however.

Once a spell has been cast then your opponents may try to dispel it. To do so requires the opposing Wizard to be in line of sight to the casting Wizard, and within 3 boxes. This range is measured between the dispelling and casting Wizards. Diagonal boxes counting as 1.5 boxes for this purpose.

If the value is higher than the final value of the casting Wizard then the spell is unbound and takes no effect. Each Wizard may only attempt to dispel a number of spells equal to their level, each opponent turn.

The Winds of Magic are fickle. If a 1 PIP card is drawn when attempting to cast, then something seriously has gone wrong. The spell automatically fails, and draw another card to see what has gone wrong. To this value add the casting Wizard’s level.

A Wizard’s save is one worse than the General of his type.

Loss of a Wizard

Wizards are lost in the same way as Generals. If they are lost then loose additional Victory Medals equal to the Level of the Wizard killed.

Spells and Line of Sight

Wizards attached to a unit are assumed to be in the front rank of that unit. Line of sight for a spell is determined from the unit itself.
Detached Wizards are treated as if they were at the front of the box for Line of Sight purposes. In all cases use Line of Sight rules as if shooting. Wizards on a hill can see and cast over troops in the boxes immediately adjacent, other than to another hill. In all other cases spells cannot be cast overhead,

The only target priority for Wizards casting spells is if they have an enemy in an adjacent box. If no such enemies exist then a spell make be cast at any unit or box, in line of sight and range of the casting Wizard. Some spells may caveat this.

Skip back to main navigation

Buy Me a Coffee